In addition to his ongoing work with Ballroom’s Drive-In as a contributing artist, Leo Villareal continues to get up worldwide. Here’s a brief round-up: 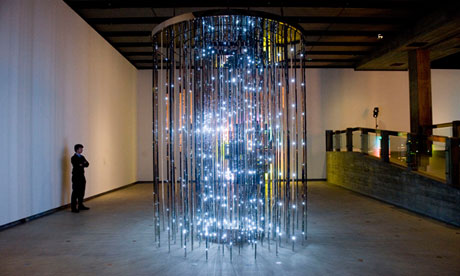 • The Guardian brought a professional electrician to the Light Show exhibition at London’s Hayward Gallery. His assessment of Villareal’s Cylinder II was one of collegial respect:

“It really put a smile on my face – especially when I thought about how impossible it would be to install something like this in your own home. It must weigh a ton. You’d probably bring the ceiling down if you tried.”

• Paper Magazine alerts its readers to the impending departure of Villareal’s Buckyball sculpture from Manhattan’s Madison Square Park on February 15, 2013, and makes the case for an ethnobotanical approach to art appreciation by urging viewers schedule a visit “after it gets dark out and after 4:20.”

• And finally, the artist is scheduled to talk about his upcoming Bay Bridge installation, The Bay Lights, at the SF Moma this Thursday, February 7. The 25,000 LED project is described by the Huffington Post in the listicle-dialect the site is known for as “the most inspiring thing to see in 2013.” Villareal displays a bit more humility regarding the epic scale of the work, telling the SF Examiner:

“I am a pretty optimistic person and I have done large-scale, complicated projects, although nothing quite like this before… Certainly I am a believer in the power of art and public art. But I knew that it was possible and … why not?”

The event at SF Moma is sold-out, but you can stream it live via the museum’s website.