Ballroom Marfa, alongside the Washington Spectator, The Big Bend Sentinel, Marfa Public Radio and Marfa Book Company, brought the second biennial Marfa Dialogues, a three-day symposium that included conversations around climate change and sustainability with artists, performers, writers, scientists and entrepreneurs — among them Michael Pollan, author of The Botany of Desire and The Omnivore’s Dilemma, and Rebecca Solnit, the distinguished critic and author of A Field Guide to Getting Lost and A Paradise Built in Hell. Other featured participants included David Buckland, Hamilton Fish, Cynthia Hopkins, Diana Liverman, John Nielsen-Gammon, Robert Potts, Tom Rand and Bonnie J. Warnock.

The 2012 Marfa Dialogues began with the opening of Carbon 13, Ballroom Marfa’s fall 2012 exhibition presenting newly commissioned works by artists that propose a creative response to climate change. Curated by David Buckland, Founder and Director of Cape Farewell, Carbon 13 featured eight international artists who have ventured alongside scientists to some of the world’s geographic tipping points, places profoundly stressed by our warming planet, and whose work aims to stimulate a wider engagement with the climate debate.

We kickstarted our symposium following the annual town-wide Marfa Lights Festival Parade at the Crowley Theater where we hosted a thought-provoking conversation about art and activism with Carbon 13 artists, moderated by Rebecca Solnit. The next discussion examined the ecological challenges facing the Southwest with leading environmental expert Diana Liverman and Texas State Climatologist John Nielsen-Gammon. On Sunday morning, guests were invited to engage with the West Texas landscape on a guided nature walk led by Bonnie J. Warnock, chair of the Department of Natural Resource Management at Sul Ross University. Sunday continued with two events at the Marfa Book Company — a reading by Rebecca Solnit and a presentation by Tom Rand, a Cleantech investor and expert on carbon mitigation. The weekend concluded with a performance by New York-based artist Cynthia Hopkins of This Clement World, a musical that sails through the burning ice and myths of the high arctic.

With the Marfa Dialogues and Carbon 13, Ballroom Marfa continued its ambitious mission to discover new perspectives on social issues by examining them through the lens of artistic practice. By underlining the power of artistic engagement to communicate, on a human scale, the urgency of global climate change, the event hopes to inspire and envision the cultural shift required to build a sustainable society.

All weekend events were free and open to the public. Marfa Dialogues panels and conversations were broadcasted on Marfa Public Radio

Since 2001 David Buckland has created and now directs the Cape Farewell Project, bringing artists, scientists and educators together to collectively address and raise awareness about climate change. The artists have already been the subject of a film for The Culture Show and a BBC documentary. The art resulting form these fruitful journeys has been shown at the National History Museum, London, The Liverpool Biennial and the Sage Gateshead, Newcastle. David is a designer, artist and filmmaker whose lens-based works have been exhibited in numerous galleries in London, Paris, and New York and collected by the National Portrait Gallery, London, the Centre Georges Pompidou, Paris, the Metropolitan Museum, New York and the Getty Collection, Los Angeles amongst others.

Hamilton Fish is a publisher, social entrepreneur, environmental advocate and film producer in New York City. Fish first partnered with Ballroom Marfa in 2010 to create the inaugural Marfa Dialogues focused on issues relating to the border. He is currently the President of the Public Concern Foundation and publisher of the twice-monthly independent political periodical, The Washington Spectator, edited by Lou Dubose. Fish is also the producer of two of the epic films of Marcel Ophuls, The Memory of Justice and the Academy Award-winning Hotel Terminus, and is currently working on a film about the last Holocaust prosecutions, titled The End of Living Memory. Fish serves as President of the Alice Curtis Desmond and Hamilton Fish Library in Garrison, New York, and is on the boards of Riverkeeper, the Hudson River and clean water advocates, where he is currently helping to lead a campaign to close the Indian Point Nuclear Power Plant; the Gomez Foundation, which maintains and develops the Gomez Mill House in Marlboro, New York, the earliest known Jewish Homestead in North America; the Merchant Ivory Foundation, which preserves the archive of the work of Ismail Merchant and James Ivory and develops new independent film and cultural projects; and the Fund for Constitutional Government, which develops and sustains organizations that protect and reinforce basic constitutional principles.

Cynthia Hopkins will perform the closing night of the Marfa Dialogues and as part of the exhibition Carbon 13. Hopkins is a writer, composer, performer, multi-instrumentalist, and theater artist. Her mission is to investigate new forms of theatrical communication, which provoke emotion, stimulate the senses and enliven the mind. Her unique multimedia theater performance extravaganzas are as philosophical as they are entertaining, as intellectually challenging as they are viscerally emotional, as deeply comical as they are tragic, and as historically aware as they are immediately engaging. As such they obscure the distinction between edification and entertainment. She is the co-founder and artistic director of the ensemble company Accinosco with whom she has created four full-length multimedia performance works. Hopkins is currently at work on the creation of This Clement World, addressing the climate crisis.

Professor Diana Liverman is based in Tucson, Arizona, an Oxford Fellow and co-director of University of Arizona’s Institute of the Environment. Liverman’s main research interests include climate impacts, vulnerability and adaptation, and climate policy and mitigation especially in the developing world. She has been an active member of national and international advisory committees on global change and is a current member of the new National Academy of Sciences Committee on America’s Climate Choices, which is advising the US government on responses to climate change. Her most recent publication, Informing Adaptation, argues for streamlining and adapting information delivery about environmental change in an effort to reach as broad a base as possible.

John W. Nielsen-Gammon, Ph.D., is a regents professor in the Department of Atmospheric Sciences at Texas A&M University and serves as the Texas State Climatologist. He holds a Ph.D. from the Massachusetts Institute of Technology. He joined the faculty at Texas A&M University in 1991 and was appointed Texas State Climatologist by then-Governor George W. Bush in 2000. He has served as acting executive associate dean for the College of Geosciences, chair of the American Meteorological Society Board on Higher Education and president of the International Commission for Dynamical Meteorology. He is a fellow of the American Meteorological Society. Dr. Nielsen-Gammon’s research involves such topics as jet streams, heavy rain, sea breezes, air pollution, data assimilation, climate data quality and drought monitoring and forecasting. He teaches courses in weather analysis, weather forecasting, atmospheric dynamics and climatology.

Michael Pollan is an award winning author, journalist and activist. A graduate of Bennington College and Columbia University, he is a professor of journalism at UC Berkley. Pollan’s groundbreaking book, The Omnivore’s Dilema was named one of the five best non-fiction books of 2006 by the New York Times and Pollan was awarded the James Beard Foundation Award for best food writing in 2007. An advocate for a diet built upon locally sourced food, Pollan’s writing examines the multi-faceted relationship between humans, nature and food through the ages. His 2009 In Defense of Food: An Eater’s Manifesto and Food Rules: An Eater’s Manual was recently republished as an illustrated edition featuring paintings by Maira Kalman.

Robert J. Potts is President and CEO of the Dixon Water Foundation, a private foundation supporting sustainable watershed management. From 2004 through the summer of 2007, Potts was the General Manager of the Edwards Aquifer Authority, a regional regulatory agency created by the Texas Legislature to manage, enhance and protect the Edwards Aquifer, which spans eight counties in south central Texas, serves as the primary water source for more than one and a half million people and supports numerous springs in the area, including the two largest springs west of the Mississippi River. From 1993 to 2004, Mr. Potts worked at the Nature Conservancy where he held several positions including State Director of Texas and Vice President for the South Central Division, managing the conservation work in Mexico, Texas, Oklahoma, Arkansas and Louisiana. Mr. Potts previously practiced law with the firm of Baker and Botts in Houston where he focused on international and corporate issues. He earned a Juris Doctorate degree from Columbia University in 1984 and a B.A. degree from Baylor University in 1980.

Tom Rand is a global thought leader with a recognized record of extraordinary achievement in the promotion of a low carbon economy. A green entrepreneur, investor, advisor, public speaker, and author, Rand’s ambition is help bring clean technology to life. Offering a perspective that is both pragmatic and optimistic, Rand’s bare-knuckled approach is straight-forward, while balancing the economic, political, scientific and technological sides of this important topic. Currently Rand is the Cleantech Lead Advisor at MaRS Discovery District in downtown Toronto, Canada where he helps the next generation of clean tech companies grow to global leadership. As well, Rand is the founder and director of Vci Green Funds, a seed and venture capital fund in the low-carbon sector; is managing director of the newly established MaRS Cleantech Fund I L.P.; is co-developer of Planet Traveler, “the greenest hotel in North America;” and sits on the Board of Directors of a number of Cleantech companies.

Rebecca Solnit is a San Francisco based writer known for her diverse areas of expertise and advocacy of environmental and human rights causes. Though impossible to nail down in one specific genre, her work has ranged from personal essays and travel guides to art and political critique. She won the National Book Critics Circle Award in 2003 for River of Shadows: Eadweard Muybridge and the Technological Wild West. Her latest book, Infinite City, is a whimsical and visually stirring history of the San Francisco Bay. Solnit has also written extensively about contemporary land battles between indigenous peoples and the US government, the triumph of community in the wake of ecological disasters, and the metaphorical merits of walking. “A lot of people think of political activism as some grim duty,” Solnit says, “and I think we do have an obligation to be citizens—to be informed and engaged—but it’s not just duty. Public life enlarges you, gives you purpose and context, saves you from drowning in the purely personal, as so many Americans seem to.”

Bonnie Warnock has been an Associate Professor at Sul Ross State University since 2001. Her area of focus is Range Science classes in the Department of Natural Resource Management, where she currently serves as chair of the department. She is a co-advisor for the nationally recognized Range and Wildlife Club at SRSU and has an active research program with projects focusing in restoration, plant ecology and fire ecology. Warnock grew up on a ranch in the Trans-Pecos, where her family has ranched since the 1890s. It was through that experience as a young child that she developed a passion for the ranching industry, nature and the outdoors. She has a B.S. in Range Science from Sul Ross State University, an M.S. in Range and Wildlife Management from Sul Ross State University and Ph.D. in Soil Science with an Emphasis in Restoration from Texas A&M. Additional support provided by the Andy Warhol Foundation for the Visual Arts, National Endowment for the Arts, The Dixon Water Foundation, the Brown Foundation, Inc., Houston, the Public Concern Foundation, Texas Commission on the Arts, the Foundation for Contemporary Arts and Fredericka Hunter, with generous contributions by Ballroom Marfa members. 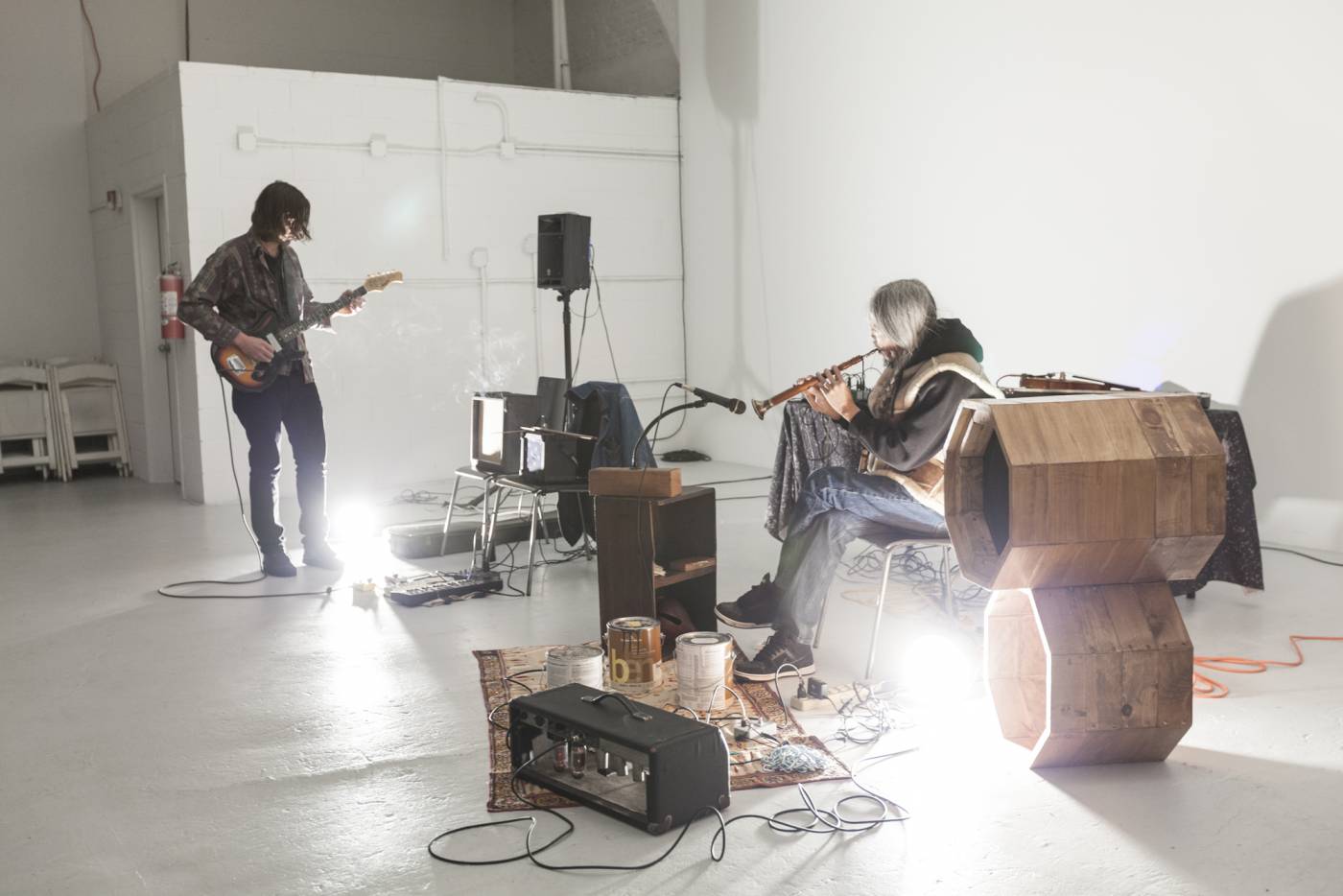